Amber Lounge Fashion Show, Inside the VIP experience at the Monaco Grand Prix

You may have seen photos of this glamorous fashion show in Monaco, and wondered what it would be like to actually be there, well I was, thanks to Rebecca Whitlocke of Access Riviera. This has been a long held ambition and I had to pinch myself to finally realise a dream come true. I was at the Amber Lounge Formula 1 VIP fashion show! 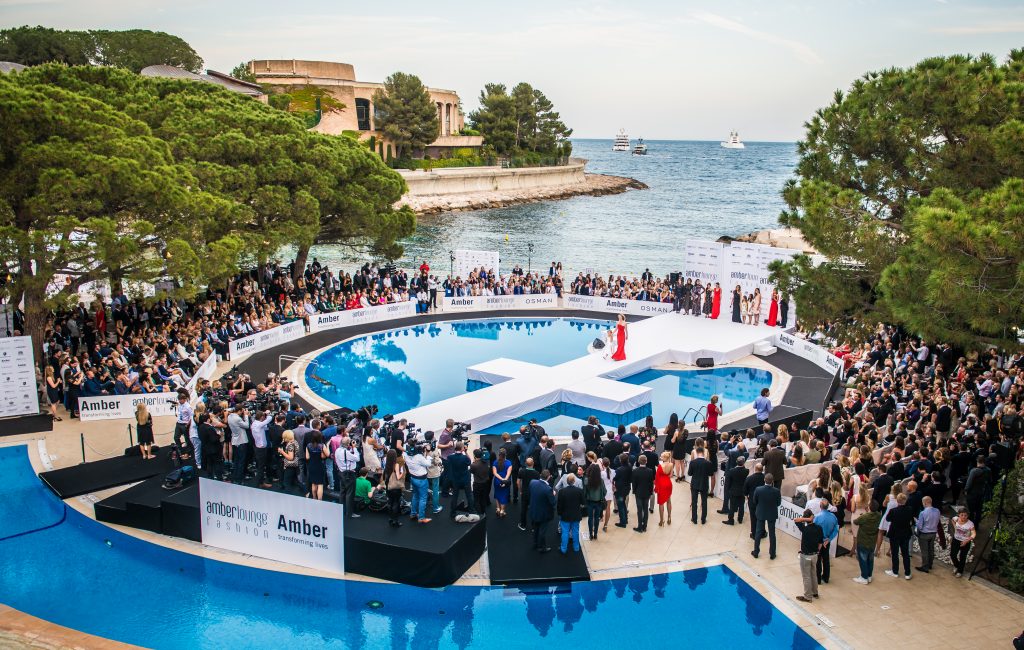 With a host of Formula 1 drivers, international celebrities and Monaco Grand Prix VIPs flocked to the Amber Lounge Monaco Fashion Show on Friday 26th May, to celebrate the start of Formula 1’s most prestigious event, taking place on the streets of Monte Carlo. 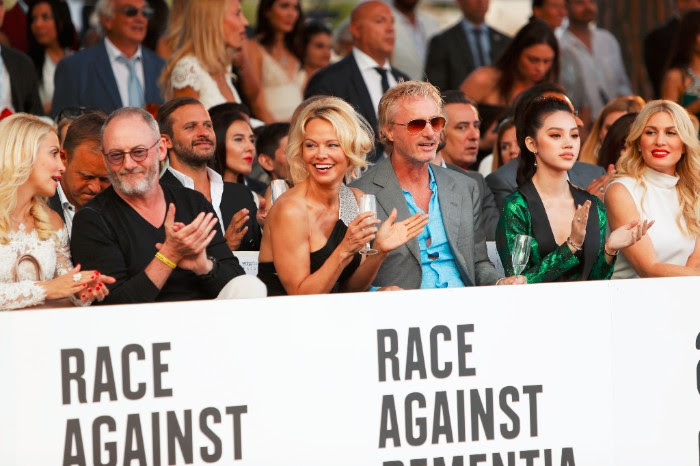 The excitement didn’t end there, or for me because those stars – and more – were set to shine bold and bright at the biggest and best F1 party nights in town: Saturday 27th and Sunday 28th at Amber Lounge. F1 drivers Stoffel Vandoorne, Daniil Kvyat, Esteban Ocon, Pascal Wehrlein,

Marcus Ericsson, Charles Leclerc and Marc Gene swapped their race suits for custom tailoring that evening, rocking the runway in Apsley of London and Michael Kors formal wear, in aid of this year’s charity partner, ‘Race Against Dementia’. 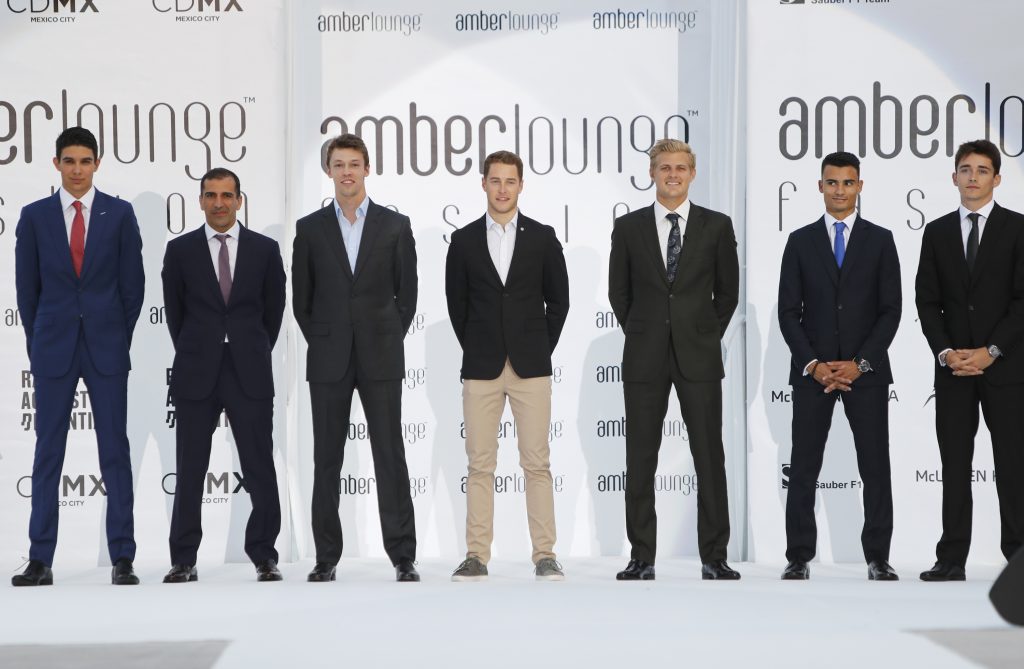 The Amber Lounge Fashion Show, held at Le Meridien Beach Plaza hotel, is one of the most-watched events of the Monaco Grand Prix weekend and was attended by more than 300 journalists, photographers and television cameras from all over the world including Luxury News Online. 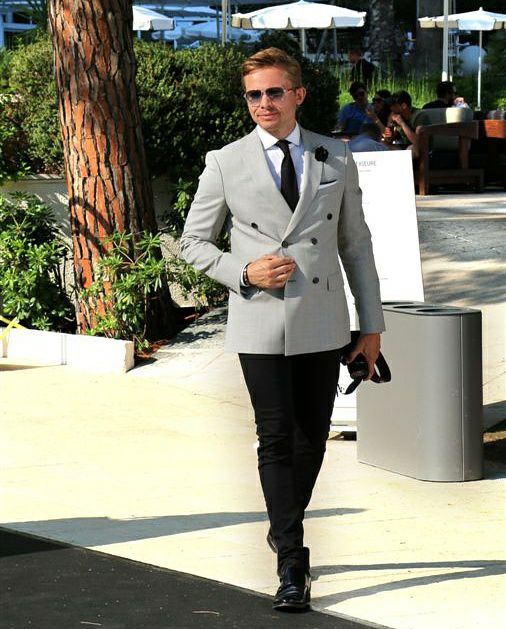 Setting the style note for the evening were show hosts Federica Masolin and Natalie Pinkham, Sky Sports F1 TV presenters in Italy and the United Kingdom, and two of the biggest names in Formula 1 broadcasting. Dressed head to toe in Silviya Neri, the signature designer for the F1 ladies’ evening wear collection, they compered a spectacular show, opening with a jaw-dropping display of Safiyaa swimwear. Next on stage, Amber Lounge Monaco’s headline music act, Chris Willis, AKA ‘The Voice of David Guetta’, gave a powerhouse performance of his Eurodance hit, ‘Would I lie to you’ as F1 drivers walked on water at the spectacular swimming pool setting. 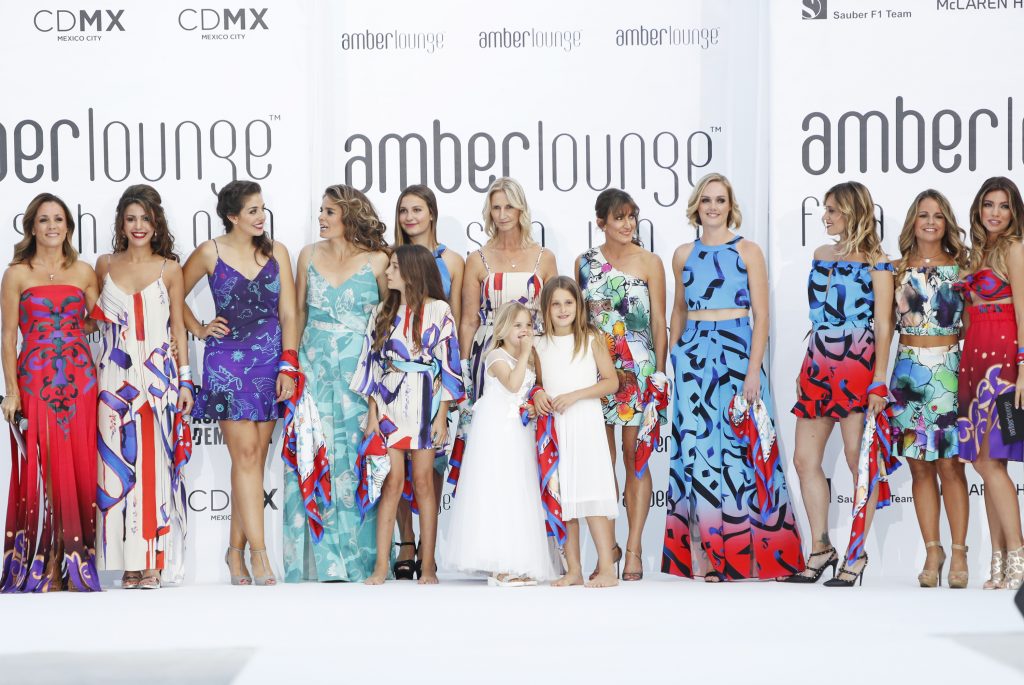 Soon, it was time for the live auction, during which generous bidders raised an incredible amount of more than 450,000 EUR for Amber Lounge Charity, Race Against Dementia.

The intoxicating atmosphere was heightened by the brand new cocktail Angel Soul from Mexico City, which is the Official Destination Partner of Amber Lounge. 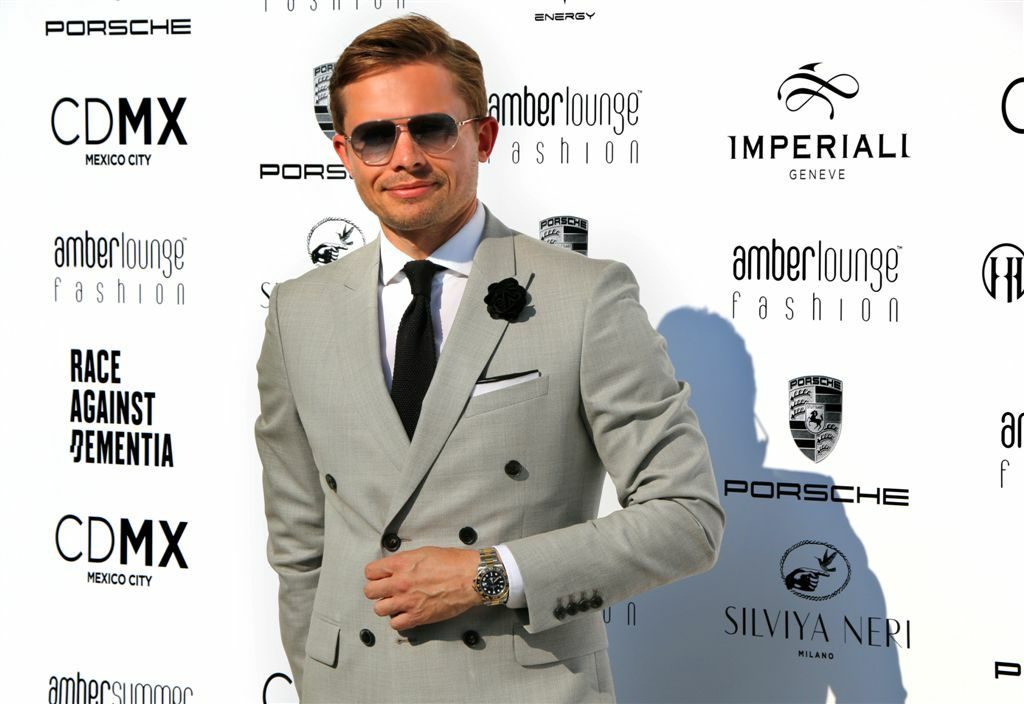 Amber Lounge is the perfect antidote to all that nail-biting, edge-of-your-seat spectating, with two lavish party nights on Saturday May 27th and Sunday May 28th. It’s the place where you can rub shoulders with the drivers as they let their hair down after a tough weekend of adrenaline-charged F1 racing. This year’s chosen charity is the Race Against Dementia, a foundation that was created by 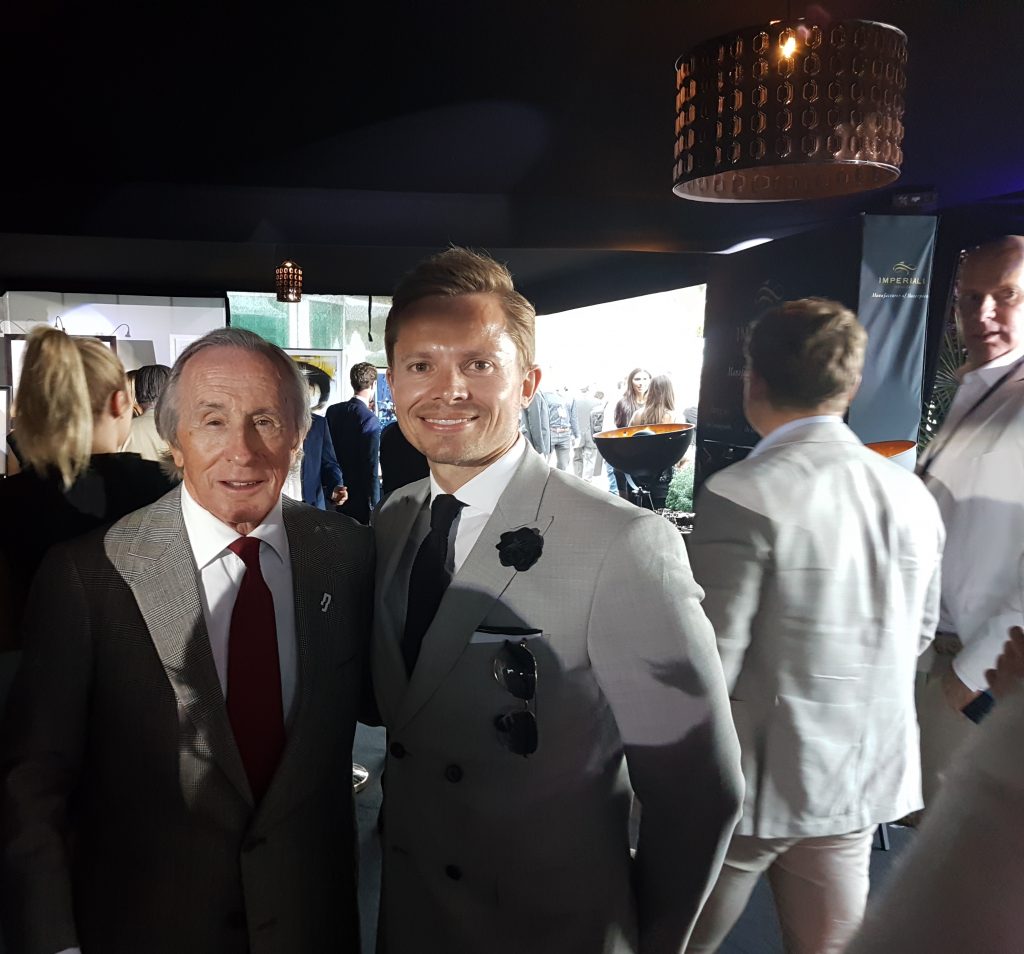 Formula 1 Legend Sir Jackie Stewart following his wife’s diagnosis with the condition. Lady Helen was the original pit girl in the 1960’s when the Scottish driver was at the height of his career winning 3 world titles. 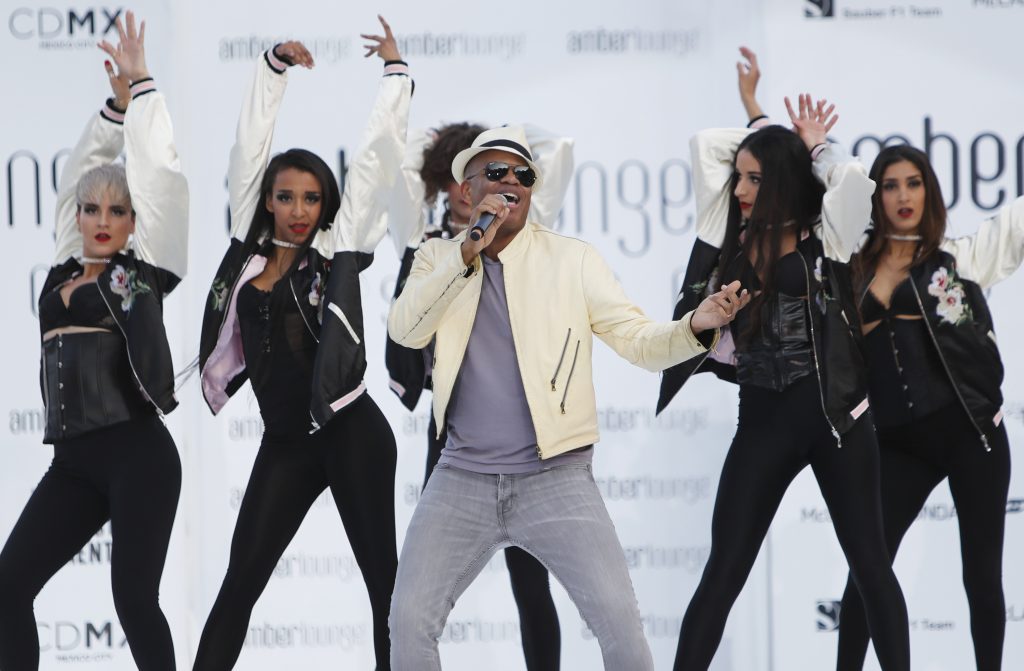 The Amber Lounge were keen to support the charity as CEO Sonia Irvine’s mother has also suffered with the disease. Sonia and her brother, former driver, Eddie Irvine know first-hand how hard it can be to watch someone so close struggle with the daily challenges dementia causes. The purpose of the evening is to raise awareness and funds for research into dementia and its causes. The well supported charity auction featured iconic items and money-can’t-buy experiences. Amongst the prize donation are a framed painting made by artist Arunas Rutkus, a personal vintage pack of Champagne by Hatt & Soner and a series of unique motor racing photographs donated by Sir Jackie Stewart. Once the guests have finished dining with stunning views across the Mediterranean the dancing will begin with world famous acts and DJs keeping everyone going until dawn!

For VIP hospitality options and tickets to Amber Lounge, you can visit http://amber-lounge.com/

To find out more about Race Against Dementia, visit  http://raceagainstdementia.com/

Close search
Search
We use cookies to ensure that we give you the best experience on our website. If you continue to use this site we will assume that you are happy with it.OkRead more